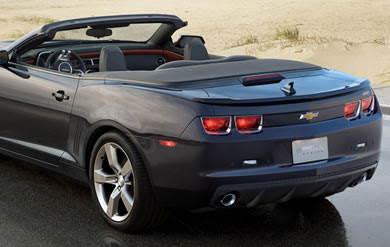 A year ago General Motors gave a preview of the Camaro Convertible to a few select enthusiasts and amongst their feedback was a dislike of the old-fashion whip antenna on its rear. They sent their boffins to work and are proudly showing off the now invisible AM/FM antenna stashed away in the rear spoiler.

The coupe normally has the antenna hidden in the rear window glass and the thought of a traditional whip antenna was obviously a retro step too far for the Camaro fans.

Well done GM, all you have left to hide away now is the sharks-fin satellite radio antenna and the centre break light…