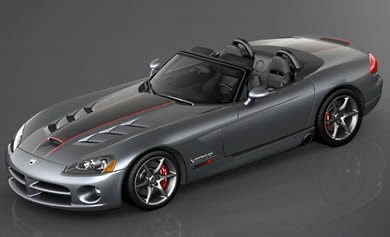 The Dodge Viper or SRT-10 as it is known in certain countries is making its final curtain call. It made its debut as a concept way back in 1989 and so after 21 years (and 18 years of production) it’s time for retirement. The Viper’s chassis set up was dated even back when it was launched and the huge engine is a dinosaur in an age of high tech efficiency. Despite this the Dodge will be looked back on as a high point in American car design. Its an exciting car to drive, has huge amounts of power and is priced competitively.

18 Final Edition Roadsters will be built, each painted with a graphite clear coat with a black center stripe that’s outlined in red and with anthracite six-spoke wheels at each corner. There are various signature features inside like red surrounds to the gauges and a numbered plaque on the gear shifter.

Power comes from the same 600 horsepower, 560 pound-feet of torque V10 engine as other Vipers of late. There’s simply no need for more than that. Pricing is as yet unknown, but Dodge says the cars will be available from this summer.

Lets hope that one day Dodge/Chrysler will be in the position to make another car like the Viper.