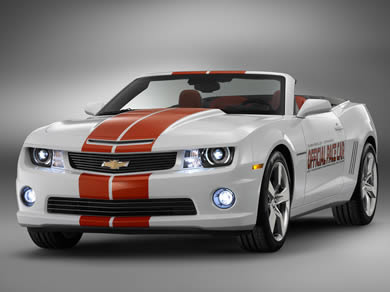 The 2011 Indianapolis 500 has a brand new pace car in the form of a special-edition Chevrolet Camaro Convertible. The new car with its distinctive white with two orange stripes paint job was announced at the Barrett-Jackson Scottsdale classic auto auction.Along with the individual colour scheme this Camaro SS Convertible has ‘Official Pace Car’ graphics and an orange leather-trimmed interior evoking the classic 1969 Camero pace car model.

The car also celebrates 100 years of both the Indianapolis 500 and the Chevrolet brand. You may expect the limited edition to be 500 cars to match the name of the race in fact only 50 will be made.

Chevy’s marketing of the Camaro Convertible continues with relentless pace. We also noted this week that one will be given as a prize for the Pete Rozelle MVP award (most valuable player) at this year’s Super Bowl. The Camero is also said to be featuring during the Super Bowel ad break at a rumoured cost of $3 million for 30 seconds. Looks like GM’s cost cutting has come to an end.