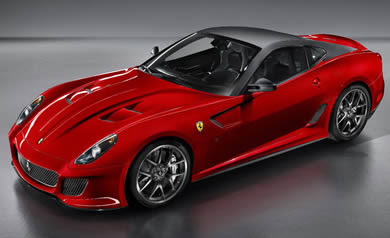 Rumors of a Ferrari 599 Convertible have been doing the rounds for some time but the latest news seems quite conclusive. Multiple sources have confirmed that a prototype Ferrari 599 Roadster was unveiled to a select group at the Pebble Beach Event in August.

The car presented was a 599 convertible with a fold away fabric roof which featured a removable glass back window. It was described as ‘an occasional use roof’ that kept weight to a minimum. In fact it is said that the roadster will weigh no more than the standard Ferrari 599 GTB.

The convertible appears to be based on the new 599 GTO (pictured) and will share it’s 661 hp 6.0-litre V12 engine and body styling. It should reach dealers as a limited edition of 100 cars by September of 2011.