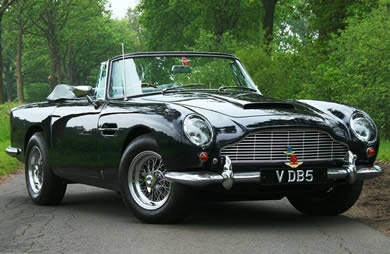 The Aston Martin DB5 is recognised as one of the most stunning classic sportscars ever made and while over a 2 year production run nearly a thousand were built the Convertible version (the name Volante was not used until the DB6) only totalled 123. Rarer still is the Vantage Convertible with a more powerful engine featuring three Weber carburettors producing 314 bhp (234 kW).

A 1965 Aston Martin DB5 Vantage Convertible, one of the nine produced, sold for a remarkable (GBP) £551,500 today (2 July) at Bonhams annual Collectors’ Motor Cars and Automobilia auction at Goodwood Festival of Speed in the UK. The sale fetched a magnificent £3,707,687 in total with a 75% sale rate.

A black 1999 Mercedes-Benz SLK 230, bought new by Dannii Minogue, and subsequently passed onto her sister, Kylie, attracted much pre-sale publicity. It finally sold to a ‘lucky, lucky, lucky’ buyer for £14,950 who fought off competition from several other interested bidders. Part of the proceeds from the sale are being donated to a breast cancer charity.