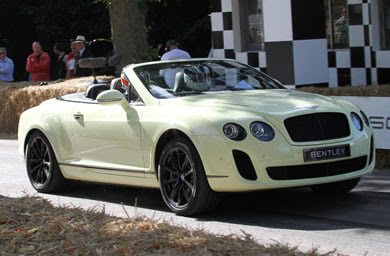 Bentley’s Continental Supersports Convertible, the world’s fastest production drophead, made its official public driving debut at the 2010 Goodwood Festival of Speed. With several searing runs up the famous hill, it forcibly underlined its supercar performance credentials.

Throughout the weekend the Supersports Convertible, which is capable of a potential top speed of 202mph and a 0-60mph sprint time of 3.9 seconds, was piloted by the racing legend and honorary ‘Bentley Boy’ Derek Bell who used his expert knowledge of the climb to set a series of typically rapid ascents and give the Goodwood spectators plenty to talk about. The Supersports Convertible was joined in the supercar paddock by its equally powerful and capable coupe stablemate – the 621bhp Bentley Continental Supersports which returned to Goodwood after making its own debut in 2009. Both Continental Supersports models are now on sale with first deliveries of the convertible due later this summer.