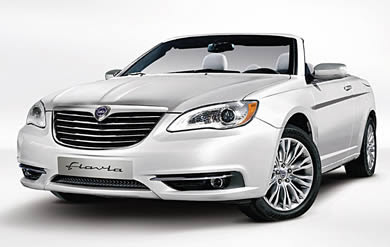 Lancia is due to launch several ‘concepts’ at the Geneva Motor Show in March. The Italian brand is clearly showing signs of Fiat Group’s partnership with Chrysler however as several of these cars show a striking resemblance to the latest models from the American brand. In particular the Lancia Fulvia drop-top concept is clearly based on the new Chrysler 200 Convertible. Potentially a good car but still something of a disappointment. Until now we had hoped that the Fulvia might be a little closer to the classic coupe of the same name.

It remains officially a concept but it certainly wouldn’t take a great deal of work to put this new car into production.