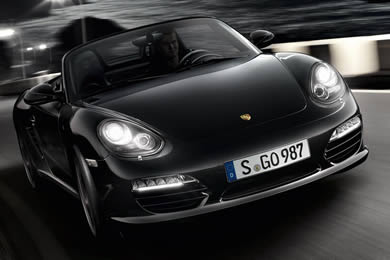 The Porsche Boxster S has a new special edition version of the fine handling roadster. Unlike Mercedes Black Series cars (many of which are built in silver) the Porsche Black Edition has black everything – paintwork, roof, wheels and interior trim. Even the roll bars, air intake grills and tailpipes are black. It’s a sinister look but perhaps not the best colour combination for a fine weather convertible; things may get a little roasty when the sun is blazing.

The Black Edition is mostly little more than a selection of options packages bundled together at a reduced price however it does get one thing not available to other Boxster S buyers – the power boosted engine from the Cayman S/Boxster Spyder. This increases output by 10hp up to 320hp, resulting in a 5.1 second 0-62mph time. An extra 2 tenths are knocked off this figure with the addition of the optional Sports Chrono Package Plus with launch control.

Worldwide production is limited to 987 cars to match the Boxster’s current model number.