Renault have done a good job of keeping their new Wind Convertible under wraps. All we knew was there was a Twingo Convertible under development. The fliptop folding hardtop roof is not completely new despite Renaults claims of innovation. Ferrari had a similar solution on their 575M Superamerica but the Wind has developed this further. The fears with the uncovered Ferrari roof was that it may collect dirt or rain water and then shower it on the occupants when it is closed. Renault avoid this problem with a full length tonneau cover. 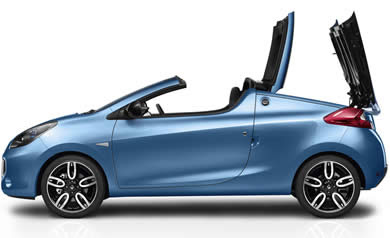 This allows the Wind to maintain the same bootspace with the roof up or down. It is in fact the only car of its class to provide just as much luggage space (270dm3 VDA) whatever the position of the roof. The Wind’s roof should also be a little lighter than the clunky system of cars such as the Peugeot 207CC while still keeping the practicality of a hardtop roof.

Compared to a normal folding hardtop, the Renault Wind’s roof is faster (folding in just 12 seconds), less complex and a better use of space. there’s a lot going for it. Let’s hope the rest of the car is equally impressive. Unlike its competitors there is no attempt to squeeze in some tiny back seats. The interior should be a step up from the Twingo to match it’s top of the range price tag.

Just two engines will be initially available, the 99bhp 1.2 TCE from the Twingo GT and the peppy 131bhp 1.6 from the Twingo Renaultsport. Either should provide enough go to justify the Wind’s sporty styling. 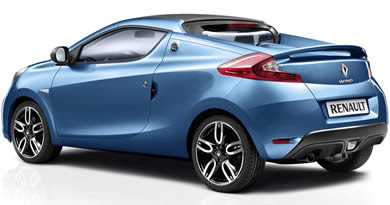 One response to Renault Wind – a Twingo Convertible