The Paris Motor Show marks the introduction of two new Porsche convertibles. Each a further addition to the already crowded 911 line.

First up is the Porsche 911 Carrera GTS. Filling the gap between the 911 Carrera S and hardcore 911 GT3 in the non-turbo side of the range. Confusing? Yes but we can see this car being a big seller. It has the extra level of performance without loosing its everyday usability. Performance is middling in the range as you would expect with a 408 hp version of the 3.8 litre flat 6 engine. Prices are yet to be released but Porsche say that it will have an “economic advantage” over the GT3. 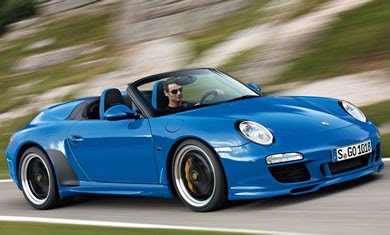 Also shoe-horned into the bulging 911 range is a Speedster version. Powered by the same 408 hp engine as the GTS it seems to offer much the same package but with a more bulbous rear designed to evoke the rather prettier 1950s classic 356 Speedster. This one has the PDK dual-clutch transmission as standard (it’s an option in the manual GTS), unique styling and the knowledge that production will be limited to 356 cars.