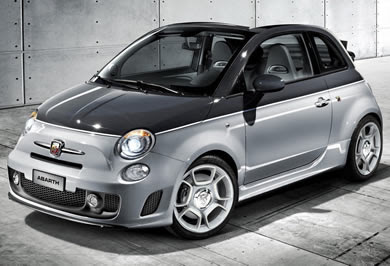 Abarth have unveiled the convertible 500C at the Geneva Motor Show. Based on the Fiat 500C the Abarth features considerable power and performance enhancements as well as a sporty styling package.

Alongside the classic body colour scheme, Abarth is offering two-tone paintwork for the first time on a 500. This is topped off with a spoiler and 17” diamond pattern alloy wheels.

The Abarth 500C is powered by a turbo charged four cylinder inline engine with a total output of 140 HP at 5000 rpm and a peak torque of 206 Nm at 2000 rpm in Sport mode. The engine is mated to a “Abarth Competizione” 5-speed sequential paddle-shift transmission and sprints the car from 0 to 60 mph in 8.1 seconds, while top speed reaches 127 mph /205 km/h. This performance is partly achieved by the overboost function, activated by the Sport button that modulates control unit mapping and turbo pressure in addition to load on the steering wheel. Yet this typically Abarth performance comes with very frugal fuel consumption: 6.5 l/100 km over a combined cycle.

The Abarth 500C will go on sale in the next few months.