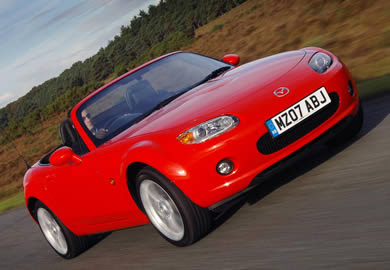 The world’s best-selling roadster, the Mazda MX-5, has added another accolade to its many awards by earning the title of ‘Best Sports car’ in the highly-regarded 2010 JD Power vehicle ownership satisfaction survey, published yesterday.

In total more than 17,000 car owners across the UK took part in the annual survey. Owners of Mazda’s iconic two-seater sportscar gave their cars top-scores for appearance, exterior and interior quality and mechanical reliability, performance, running costs and also for dealer service.

Ultimately, the Mazda MX-5 notched up a satisfaction rating of 82.3 percent – beating the Mercedes-Benz SLK, VW Eos and Audi TT rivals to claim the ‘Best-in-Class’ honours.

It is not the first time that the Mazda MX-5 has won a JD Power award it has a trophy cabinet full of JD Power awards and now adds this year’s title, too.” The latest survey confirmed that MX-5 owners are particularly happy with the soft-top’s quality and reliability. The exterior design got top marks and the car was highly rated for how it drove.

Continuing to celebrate the 20th Anniversary of its globally successful sportscar, Mazda currently offers the MX-5 as a soft-top or hardtop roadster coupe (with the world’s fastest folding powered roof, up or down in 12 seconds), with prices ranging from £17,245 to £22,730 (GBP).

“Today, the Mazda MX-5 remains unrivalled as a rewarding sportscar that can also be used for everyday motoring all year round. The MX-5 soft-top continues to offer the purest, fun-to-drive thrills, while the Roadster Coupe adds to those thrills with an even more premium experience, together with that same exhilarating drive. With its low running costs and legendary reliability, the MX-5 remains an extremely competitive proposition as hundreds of satisfied owners confirm,” comments Mark Cameron, Sales Director, Mazda UK.