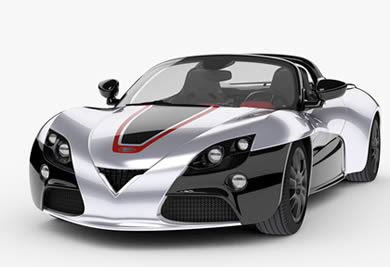 Venturi may not be a household name and even within motoring circles it isn’t a brand that crops up very often. However they have been around for over 25 years and not only put the first (that we know of) electric sportscar into production they also have the world land speed record for an electric powered vehicle to their name. Impressive stuff but the company produce cars in such tiny quantities that you would be lucky to ever see one on the road even if you knew what you were looking for.

The Venturi Fétish was launched 6 years ago and now has had a thorough redevelopment to boost performance and usability. A new 300hp motor will take it from 0-100 kmph in 4 seconds knocking a second of the journey compared to the previous car. The battery system is also updated expanding the range to 340 kilometres. The body styling and interior have also apparently been redesigned but frankly we are struggling to see a difference. That’s not bad news though. We liked it before and it hasn’t dated.

If you want to get your hands on the new 2011 Venturi Fétish you will need time on your hands. Each car is made by hand and to order in the Principality of Monaco, takes 12 months to complete and costs 300,000 € + VAT.