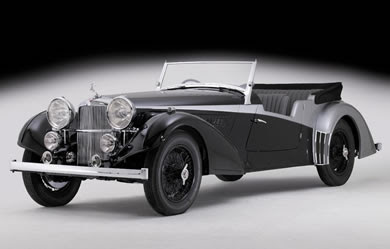 Alvis, one of the most innovative car manufacturing brands of the 1930’s, is set to return to business in the 21st century.

The Alvis brand, the company stopped making cars in 1968, has been formally transferred to Red Triangle, the company which has been responsible for providing parts, maintenance and restoration services to Alvis owners for the last 40 years. A new company The Alvis Car Company has been created to carry this legendary name from British motoring history forward. The company’s philosophy will be to maintain the essence of the brand by reintroducing selected original Alvis models as newly manufactured cars and for Red Triangle to continue to expand its technical, repair, maintenance and restoration services to the remaining 4,000 Alvis models still on the road.

Alvis produced bespoke and highly innovative touring, sports and saloon cars in the traditional manner with owners choosing their own coachwork bodies built on an Alvis chassis. Many famous people have owned Alvis cars including peers of the realm and famous aviators such Lord Brabazon, and the Second World War fighter ace, Douglas Bader. An Alvis model from the early 1960’s was used by Stephen Fry in the recent television series Kingdom.

One response to Alvis cars make a comeback