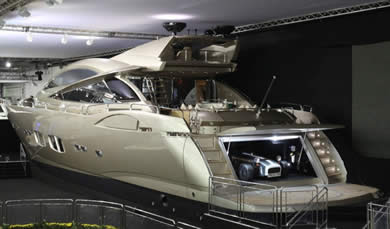 It’s a dilemma that we all worry about: you pull into Monte Carlo Harbour in your super yacht and you suddenly realise that you’ve left your sportscar in St Tropez. It can happen to the best of us but thankfully luxury yacht builder Sunseeker and sportscar maker Caterham have put together a solution to this common problem.

Sunseeker’s Predator 108 Special Edition is making its world debut at the London International Boat Show with a Caterham parked in the stern garage area which is normally reserved for a small sports boat. 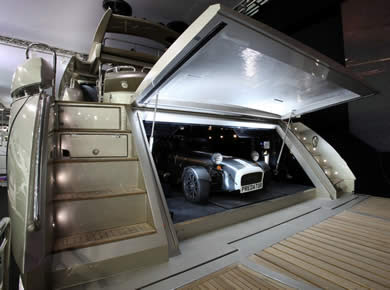 While the huge yacht cruiser costs from around £7.1 million, a road-going Caterham Seven starts at just £12,995. Its lightweight design and eye-watering performance could provide the Predator’s owner with as much fun on the roads as the sea, whether in the South of France or Italian isles.

Caterham Cars Managing Director, Ansar Ali, said: “Our two companies have more in common than one might think at first, despite the disparity in vehicle size. The more minimal, performance-focussed approach Sunseeker has adopted for the Predator series may well have been congratulated by Colin Chapman himself and surely any Sunseeker owner would relish the chance to match their experience on the waves with the ultimate drive on the roads.”