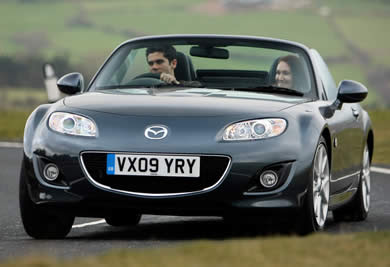 January is the one of the best months for convertible bargain hunters, with some models now costing up to 17% less than they were in September, according to online used car retailer, Carsite.co.uk.

With the recent whiteout across the UK and sub-zero temperatures chilling Brits to the bones, purchasing a convertible might not be top of many car buyers’ priorities. However, January could be the perfect time to make a drop-top investment for the warmer summer months. Convertible prices have been falling continuously since the end of the summer with examples from Saab and Renault priced at 15-17% less than their September 2009 recommended retail prices.

Carsite’s Alistair Jeff commented; ‘Whilst many are put off buying a convertible in the middle of winter, there actually couldn’t be a better time for buyers after a bargain. Even with standard levels of depreciation on used cars, seasonal demand for convertibles has a far greater impact on price. February and March typically mark the start of the price upturn for convertibles, so if you want an al-fresco driving experience this summer, January is financially a very good time to be shopping around.’

In 2009, they found that summer demand for the Mazda MX5 roadster saw the trade value of some second-hand models increase by more than £1100 between April and July.