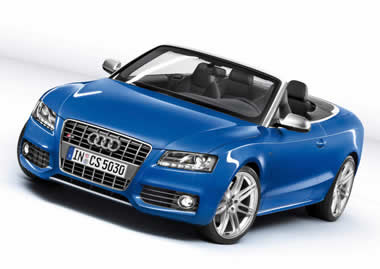 The Audi A4 Cabriolet is due to be replaced by a soft top version of the A5 coupe in 2009.

The Audi A5 Cabriolet will use a traditional fabric roof rather than a folding metal hard top, taking just 15 seconds to open and 17 seconds to close. The cloth roof helps to preserve boot space, leaving 320 litres when folded; 135 litres less than the coupé.

The A5 will be available with a range of engines from the 2.0-litre petrol TFSI unit to a V6 powered S5 model. The S5 will use the new supercharged 3.2 litre engine from the S4 rather than the V8 seen in the S5 Coupe. The S5 Cabriolet will have four-wheel-drive as standard making it one of the very few all-wheel drive convertibles.

Prices are yet to be announced but are expected to undercut the equivalent BMW 3 series models.