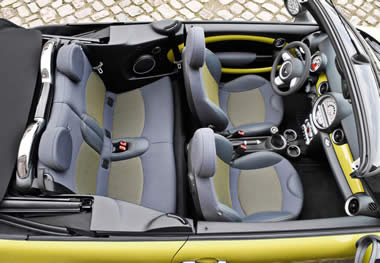 The MkII MINI Convertible is finally making an appearance. The MkII hardtop was released back in 2007 but it won’t be until 2009 before it’s convertible sibling makes it’s way to dealerships. Until now the MkI convertible has been available but it will soon make way for a stronger and lighter car.

The biggest visual difference is the now tucked away roll-over bar. Previously there were two chromed hoops, very much on show. In the new car a one piece, curved bar is hidden away behind the rear seats and will only pop up if the car is in danger of rolling over.

The new car will be available in standard and tuned S forms, with the latter featuring an air-scoop on the bonnet, twin exhausts and a rear diffuser. The MINI also features a canvas roof that can be fully retracted or closed in 15 seconds, and which operates at up to 20mph. The roof can also be partially retracted 40cm, giving the effect of a sunroof, at speeds of up to 75mph. 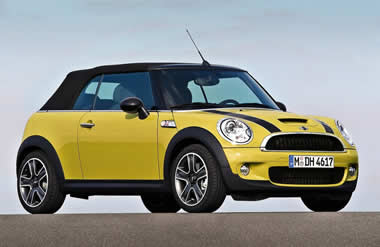