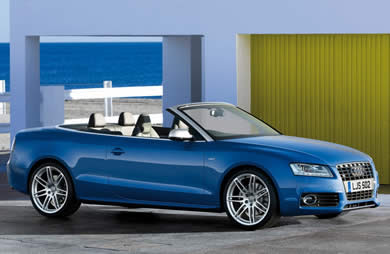 Audi have released details of the forthcoming S5 Cabriolet, the most powerful convertible yet in the A5 range of cars.

The latest A5 flagship is powered by the same supercharged six-cylinder engine that enables the previously V8-powered S4 Saloon delivering impressive pace with much improved high efficiency and emissions. The great soundtrack may be gone but working exclusively with the equally economy-focused 7-speed S tronic twin-clutch sports transmission, the new unit pares CO2 output back to 224g/km and boosts economy to up to 29.1mpg, yet also powers the S5 Cabriolet to 62mph in 5.6 seconds and on to a governed 155mph top speed.

The Audi S5 Cabriolet will also feature the most sophisticated version of the lightweight soft-top roof – the acoustic hood, which with additional insulating layers reduces external noise intrusion into the cabin to virtually the same level as the fixed head Coupe.

Audi will be taking orders for the S5 Cabriolet from August and delivering the first UK cars in October.