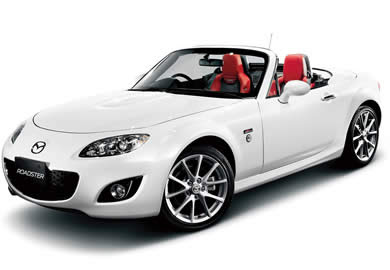 Japanese drivers will be the only ones able to celebrate the 20th year of the world’s favourite sports car. The Anniversary model will go on sale across Japan with a special upgraded specification in two varieties: the RS soft-top with a 6-speed manual, and a VS hardtop with a 6-speed automatic. Both cars get Crystal White Pearl Mica paintwork, sporty red and black Recaro seats and a full set of 20th Anniversary’ badges.

There’s no sign of anything similar for other countries but some of the Anniversary models are sure to find their way around the world on the grey import market.

The Mazda Roadster has attracted a wide range of customers since its launch in 1989, and is currently sold in approximately 60 countries. The Roadster was certified as the world’s most produced two-seat, open-top sports cars by Guinness World Records when production reached 800,000 units. Total production of the Mazda Roadster now stands in excess of 860,000 units.

>> Furter details of the Mazda MX5/Miata