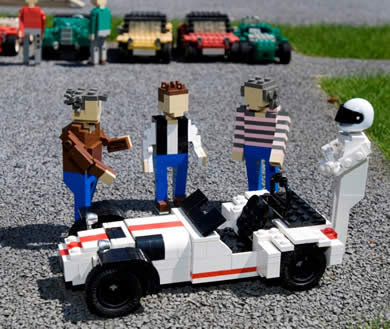 The Caterham Superlight R500 won accolades across the board in 2008, including the prestigious Top Gear Car of the Year. But you know you’ve really made it when you’re immortalised in Lego.

Legoland designers were so impressed by the Caterham R500’s achievement in winning the BBC’s top motoring decoration last year that it decided to capture the moment in its famous coloured plastic bricks.

Taking their place within the 40 million-brick Miniland, one of a number of attractions at Legoland, Top Gear presenters Jeremy Clarkson, Richard Hammond and James May, plus the elusive Stig, can be seen huddled around the Caterham Seven in a motorsport-themed area.

As well as gaining the Top Gear award, the £38,000 Caterham Superlight R500 proved its giant-killing potential by outpacing supercars like the Ferrari Enzo, Maserati MC12 and £1 million Bugatti Veyron.

Legoland’s chief model maker, Guy Bagley, said: “My colleague remembered that the Stig had put the R500 through its paces and how incredible it was on the track. It’s such a timeless and iconic car that it was a ‘no-brainer’ as our choice for the motorsport area, having already decided to feature Top Gear. Its design lends itself particularly well to our bricks, too.”

One response to Caterham R500 now in Lego