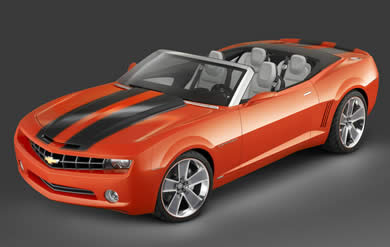 Two American muscle cars – the Dodge Challenger and the Chevrolet Camaro are like twins separated at birth. Each is a retro revival of a car killed off by the 1970’s oil crisis. Despite the current recession, high oil prices and trend for environmental awareness these ‘gas guzzlers’ maintain strong sales for their struggling manufacturers.

Since the launch of each car there has been much talk of convertible versions but budget cuts have left car companies unable to put the concepts into reality. Convertible cars do sell at a premium but the projected sales figures may not be easy to justify by a debt-laden mass manufacturer who is being forced to cut overheads. Current speculation is that the Dodge Challenger Convertible project was cancelled and the Camaro Convertible may make it to production by the summer of 2011.

This seems to leave buyers with few options. Some buyers have taken things into their own hands and resorted to having the convertibles custom built by a coach builder. Companies such as Florida’s Convertible Builders and California’s Newport Convertible Engineering will convert a standard coupe to a convertible and finish it to your own specific requirements. This results in getting an ultra-rare hand-crafted car that is unavailable for the mass market.

Both cars make attractive convertibles and technically there aren’t too many hurdles – there are only two doors and the modern structures are already strong. The chassis and windscreen frame will still need to be reinforced but nothing that will show. By the time the car is finished it won’t be far from the concepts (as pictured here) produced by the big manufacturers.

The final car will be practical to use and maintain while being an eye catching, super-rare sight that is sure to get some double takes.

One response to Convertible Muscle Cars