The British hold the European flag at the Tokyo Motor Show 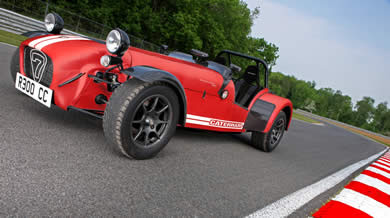 In contrast to the bustling Frankfurt Motor Show, the Tokyo Show promises to be a rather more low key affair. Only three European manufacturers will be exhibiting, among them Britain’s specialist sporstcar builders Lotus and Caterham Cars.

Japan has long been a key export market thanks to the country’s fascination with all things connected with innovative British design. Caterham has sold cars successfully in Japan since the 1970s. The exhibit at the Tokyo Motor Show is the latest move by Caterham importer, Premium Cars Import (PCI) to help promote the brand in the Far East. PCI was confirmed as Caterham’s Japanese exclusive importer in January this year.

Caterham Cars managing director, Ansar Ali, will be attending the show and said: “Japan has always been one of our biggest export markets. During the early 1990s, Caterham was selling over 100 cars a year in Japan and now, with our new importer doing great work to highlight the company from their Tokyo base, we are looking forward to pushing sales up again.

“I have no doubt we will achieve this objective as we now have a retail network of over 15 dealers in Japan who are committed to making Caterham another British success in this exciting and dynamic market.

“The Tokyo Motor Show is a fantastic way to showcase our unique products alongside the numerous world premieres from other manufacturers. To be one of only a small handful of European manufacturers present shows our commitment to this market.”

The poor European turnout at Tokyo suggests that within these recession-hit times the big European brands see taking on the Japanese on their own turf as unrealistic. Lets hope the Japanese can look on the bright side and show us some lovely new convertibles!