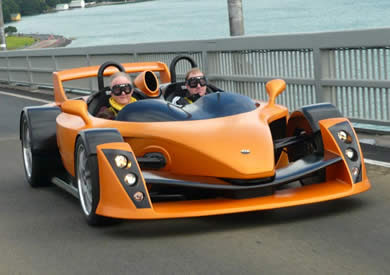 New Zealand isn’t the first place most of us would look to find a new supercar, however new producer Hulme have launched their new car from these far-flung islands. The CanAm looks distinctly like the British Caparo T1 but Hulme claim that their concepts were in development well before the T1 surfaced.

The Hulme CanAm is a car which has that old supercar mantra at its heart – a racing car for the roads. Many attempt this and few manage to pull it off without ridiculous impracticalities and reliability records. The latter should not be a problem as Hulme have chosen the Chevrolet 7.0-litre V8 straight out of the Corvette Z06. It is good for 600 horsepower and Nm of torque. Wrapping all that clout in a carbon fibre sandwich leaves a car with a power to weight ratio that would put the best Ferrari’s and Bugatti‘s to shame. It should also be less temperamental than the Caparo. The price will be in the region of £220,000/€280,000, far more reasonable than the rumoured US$700,000 first reported. We look forward to hearing more about this fly-weight monster as performance figures are released.

The Hulme brand was named after the New Zealand racing driver and 1967 Formula One world champion Denis “Denny” Hulme. While the model name recognises his achievements in the Canadian American (CanAm) Challenge Cup series of races held between 1967 and 1972.