Toyota Solara Convertible to be dropped. 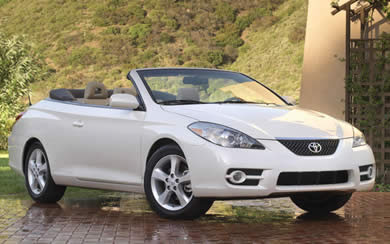 Sales of the Toyota Solara Convertible have long been in decline which has finally led to the model being discontinued this year. Production of the Solara Convertible stopped in December of 2008 but the decision to permanently cease production was not made until the Spring sales figures of the remaining cars could be reviewed.

The dropping of the Camry based model means that the Toyota brand no longer has a convertible model in the range either in Europe or the US. Plans for a replacement may not come into fruition until at least 2011.

There seems to be an increasing trend for recession hit manufacturers to be phasing out their niche market cars. However, the launch of several new cars has kept the convertible car market buoyant. The US market seems to be the hardest hit with the Pontiac G6, Pontiac Solstice, Saturn Sky, Chrysler Crossfire and Chrysler PT Cruiser all being cut in order to save cash.

Launched in 2000 and aimed at the US market, the Toyota Solara Convertible proved popular as a practical convertible car but its age has resulted in it loosing favour against competition from the likes of the Chrysler Sebring and Pontiac G6 and few will mourn its passing.