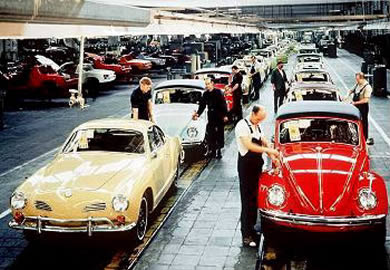 German convertible specialist Karmann has filed for insolvency as the effects of the global downturn continued to hit the world’s car makers. The company, perhaps best known for its cabriolet version of the original VW Beetle and the VW Karmann Ghia Coupe and Convertible, said it was forced to close because of “the threat of inability to pay the imminent financial obligations”.

Thankfully this may only be a temporary glitch as the company report that they are practically free of bank debts, however, the collapse of the automotive market on one hand and the cost of a major restructuring plan on the other hand have resulted in a burden that exceeds the financial capability of Wilhelm Karmann GmbH.

The union IG Metall said 3,470 workers at Wilhelm Karmann GmbH were affected by the insolvency, which comes just over a month after the company ceased assembly of full vehicles at its Rheine plant. The company said a sharp drop in sales meant it was having difficulty meeting agreements made with the union over compensation to laid off workers. It is the goal – together with the preliminary court-assigned insolvency administrator – to lead the newly restructured Karmann group into a secure future and to maintain as many jobs as possible.

Wilhelm Karmann GmbH was founded in 1901 and remains family owned. Since then it has undertaken various projects, from design to production as well as assembly of components, for various car manufacturers including Chrysler, Porsche, Volkswagen and Mercedes Benz. Recently the company has been responsible for building VW Golf Mk1-4 Convertibles, the Renault Mégane CC, Nissan Micra C+C and Chrysler Crossfire

The company was assembling Audi A4 and Mercedes CLK convertibles until shortly before Karmann filed for insolvency in Osnabrueck, where its main plant is located.