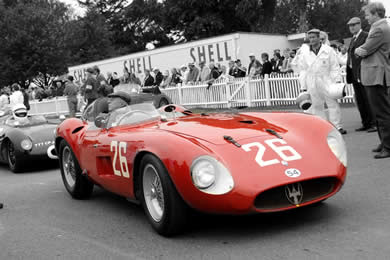 Maserati GB was once again sponsor of the 11th edition of the Goodwood Revival meeting, which welcomed over 100,000 spectators over the course of the weekend.

A record 18 classic Maseratis were entered in this year’s competitions, including four Maserati 250Fs, the legendary F1 car recently voted as the “World’s greatest racing car” by readers of Octane magazine. The Maserati 250F had been put forward by Sir Stirling Moss, who celebrated his 80th birthday at Goodwood Revival, who said: “I have great affection for the 250F because it was the car that gave me my first proper break in Formula One.”

Away from the thrilling on-track action, Maserati exhibited in the Earls Court Motorshow, recreating the glamour of an authentic 1960s show. A stunning convertible Maserati Mistral Spyder alongside a Quattroporte (Mk I) wowed the spectators, whilst they were offered a tantalising glimpse of Maserati’s “cars of the future” in the form of the GranTurismo S Automatic and Quattroporte Sport GTS that flanked their 1960s counterparts.

Mr Andrea Antonnicola, Managing Director of Maserati GB, officially announced the arrival of the new convertible Maserati GranCabrio, which will be unveiled to clients in a private preview in London on October 1st ahead of its on sale UK estimated date of March 15, 2010.

2 responses to Maserati at Goodwood Revival 2009