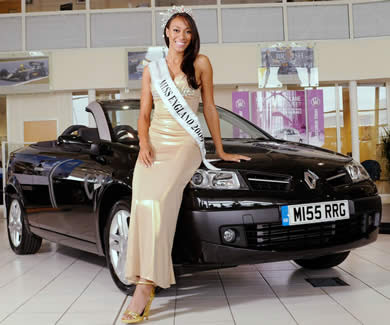 There was extra glamour at Renault London West recently when the newly-crowned Miss England visited the dealership to collect a stylish convertible which she will drive for the coming year. It was an extra surprise for Rachel Christie, aged 21, from Kensington, as she thought she was collecting a Renault Clio!

Rachel is an aspiring Olympic athlete, competing in the heptathlon and training with her uncle, Great Britain gold medallist Linford Christie. Crowned Miss England in July, Rachel saw off competition from more than 50 other entrants, thanks to her winning combination of looks, charm and success as a heptathlete. She will now drive the Mégane Coupé-Cabriolet for a year while she carries out her duties as Miss England.

Renault Retail Group Managing Director Ian Plummer, said: “It gives us great pleasure to support Rachel who has proved herself to be a worthy winner of the Miss England competition with her dedication, commitment and determination to succeed. We wish her the very best of luck for the year ahead, particularly for the forthcoming Miss World competition in Johannesburg, and also for her Olympic ambitions and wish her many miles of happy motoring. We are also delighted to make her honorary ‘Miss RRG’ and reflect this in her personalised registration number! “

Rachel said, “I am really grateful that Renault Retail have put so much faith and trust in me by sponsoring me with a Mégane. When Renault told me that they would also sponsor me for my training towards the 2012 Olympics, I was overwhelmed with excitement, and I am truly grateful for their support.”