Mercedes Benz obviously feel that the credit crunch is a just a passing thing. Not only have they recently released The SL Black Edition (with a fixed roof, so there’s no room for it in these pages) but now they have introduced the most extreme version of their collaboration with racing car builder McLaren. The McLaren SLR Stirling Moss is styled to resemble the SLR racing cars of the 1950s that proved so successful in the hands of Stirling Moss.

Each of the limited edition of 75 cars will feature a carbon fibre chassis and bodywork wrapped around the SLR 722’s a 650-hp supercharged 5.5-liter V8 and the five-speed transmission. Like the other SLRs it also has swing-up doors and a retractable air brake. 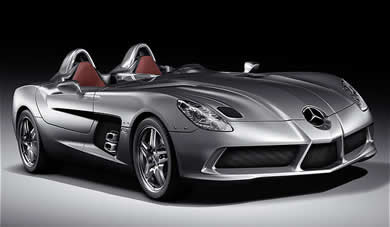 The open driving position and lack of weather gear (though there is a two-piece tonneau cover that can cover the entire cockpit or just the passenger seat) make this a car best used with a helmet on a race track. Once there you will find that it can reach 100 km/h in just 3.5 seconds and continue to a top speed of 217 mph. 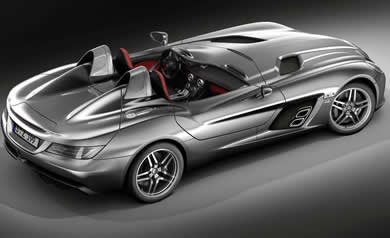