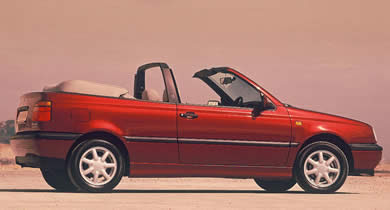 Volkswagen have confirmed rumours of an upcoming Golf Cabrio with a press release detailing its future production at the Osnabrück factory in Germany. Details of the new car are still sketchy but rumours suggest that it will be based on the Golf 6, have four seats and a fabric convertible roof. This would fit into the current line below the Eos as a more affordable model perhaps taking the place of the current Beetle Cabrio or maybe as a closely related sibling.

The VW Eos however will be replaced with an all new car in 2013 when it will be based on the Passat platform. This suggests that the future Eos will be larger and more luxurious while the Golf will be the more economical car.

The new VW Golf Cabriolet will go into production in 2011 in the Osnabrück based factory previously the site of the insolvent Wilhelm Karmann GmbH i. I. now apparently swallowed up by the Volkswagen group.

It will be good to see a ragtop Golf back on the streets again which we look forward to testing next year. It also provides a platform for a possible future Scirocco Cabriolet…