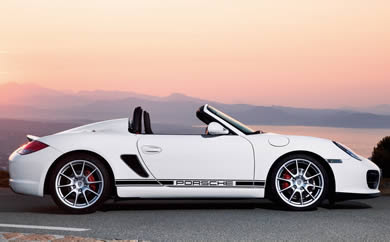 Porsche introduced a new, lightweight version of the mid-engined Porsche Boxster roadster at the Los Angeles Auto Show in December, the distinctive styling has more than a little of the Carrera GT supercar about it.

Weighing 1,275kg, the Boxster Spyder is the lightest model in the Porsche line-up, and continues this clear-cut philosophy in a package offering full homologation for the road, reflecting a common wish expressed by Porsche customers.

The new model becomes the third version in the Boxster range, joining the Boxster and Boxster S, yet stands out clearly at first sight from the other versions of the mid-engined roadster, quite simply because the Spyder has been developed first and foremost for driving in the open air. The low-slung, lightweight soft top extends far to the rear and serves to protect the driver and passenger from bright sunshine, wind and rain. When closed, the soft top, together with the bespoke extra-low side windows and the two unique, striking bulges on the single-piece rear lid, boasts a stretched and sleek silhouette reminiscent of the Carrera GT.

Significantly, the new model weighs 80kg less than the Boxster S which, combined with a lower centre of gravity and revised suspension, gives the Boxster Spyder the calibre of driving dynamics that clearly reflect the unique look of the car. 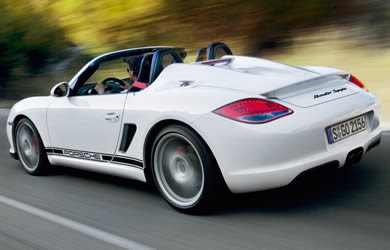 The Boxster Spyder features a tuned version of the proven 3.4-litre flat six ‘boxer’ engine with Direct Fuel Injection, which is located ahead of the rear axle. Maximum output is 320 bhp, 10 bhp more than in the Boxster S. Equipped with the PDK twin-clutch transmission and the Sports Chrono Package, the new Spyder, using Launch Control, accelerates from a standstill to 62mph in 4.8 seconds. Again with optional PDK, fuel consumption is a reasonable 30.4mpg (9.3 litres/100km) in the NEDC New European Driving Cycle and top speed, in turn, is 166 mph (267 km/h) – with the roof removed.

In 2004 and 2008 Porsche dedicated a limited edition of special Boxsters bearing the additional name Spyder, inspired by these legendary racing cars. By contrast, the new Boxster Spyder is a regular, specially developed and upgraded production model with far-reaching modifications versus the Boxster and Boxster S.

Introduction of the new Porsche Boxster Spyder will start worldwide in February 2010, and will be priced from £44,643 in the UK. Included in the purchase price is the invitation for customers to explore the dynamic attributes of their Boxster Spyder, and develop their own skills behind the wheel, courtesy of a Driving Experience Programme at the Porsche Experience Centre at Silverstone.

One response to Porsche Boxster Spyder