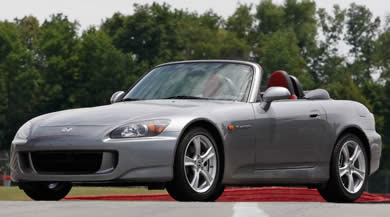 We’re hoping to have heard the first sign that Honda are developing a hybrid roadster to replace the much loved S2000 roadster.

Honda’s Head of Design Nobuki Ebisawa revealed “This is something that we are considering, and the CR-Z is only one shape of Honda’s hybrid sports cars in the current age”.

So that they’re planning a hybrid sportscar is for sure but the details are sketchy. Honda’s US dealers are known to want the company to produce a rival to the Porsche Boxster and BMW Z4, so the new hybrid sportster could effectively replace the S2000. Ebisawa could not divulge the format of the new car but he did reveal that his team is looking at weight saving techniques such as using more aluminium and active areodynamics.

The Honda S2000 is famed for being an innovative design and impressive driver’s car but due to its age is being phased out this year. So far there had not been any news of a replacement but this may be the first evidence. We’ll be keeping our fingers crossed for something new over the next couple of years.