VW Beetle bows out with a Final Edition 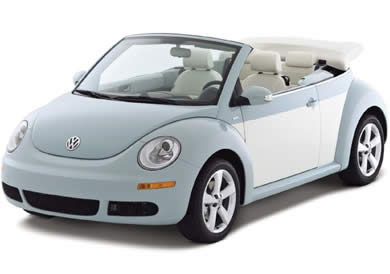 VW’s ‘new’ Beetle is reaching the end of the road with a special ‘Final Edition’ announced. 1500 of both coupe and convertible will be sold in the US. Under the bonnet it’s the standard US spec: powered by Volkswagen’s 150 horsepower, five cylinder 2.5 litre engine through a Tiptronic automatic gearbox.

It get’s more interesting though, there’s full sports suspension and unique 17″ alloy wheels to improve handling. Cosmetically each Final Edition Beetle comes with two tone Aquarius Blue and Campanella White paint with the cabrio topped off with a matching white roof. Special badging features under the wing mirrors and on the steering wheel. The hatchback version hits showrooms with a base MSRP of $20,240 and the convertible starts at $27,170.

As for a replacement, all we know is that according to VW spokesman Steve Keyes, it will be replaced in 2011 by “something Beetlish”.

2 responses to VW Beetle bows out with a Final Edition