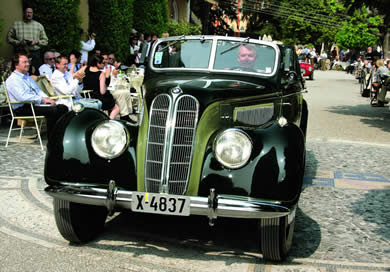 German car giant BMW have added a new service to promote their motoring heritage. The chauffeur driven tours are in rare classic convertible cars from the company’s private collection.

The tours begin at the BMW Museum in Munich and take in the sights such as the BMW Tower and 3 Series assembly plant as well as sites around the historic city. The view however may not be enough to distract occupants away from the cars. 1930’s BMW 326 and 335 Cabriolets and a 1950’s 502 “Baroque Angel” Cabriolet are to be used as well as a one-off 3200 CS Cabriolet.

The tours begin immediately and run until October 2010 at a cost of €90.