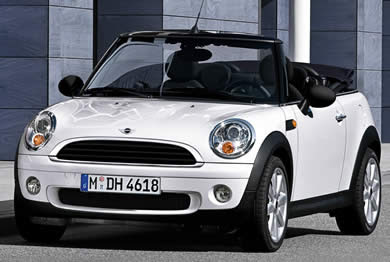 The new shape Mini Convertible was launched in 2009 but until now it was only possible to buy a Cooper, Cooper S or John Cooper Works Convertible. The introduction of a new One Convertible for 2010 provides a much lower entry point for keen fresh air fans.

The MINI One Convertible shares the new 1.6 litre Valvetronic engine of its Hatch and Clubman cousins, and produces the same 98hp and 153 Nm of torque. The new model accelerates from 0-62 mph in 11.3 seconds and goes on to a top speed of 112 mph. It also brings fuel efficiency and CO2 emissions to a new level in the convertible market, recording 49.6 mpg (combined cycle) and 133 g/km respectively. 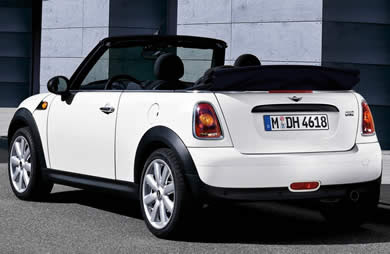 The open top four-seater features a fabric roof that opens and closes electro-hydraulically at the touch of a button up to 20 mph. Designed as a Convertible from the outset, MINI Convertible offers a torsionally-stiff body that allows it to capitalise on cutting edge chassis technology to release that special MINI go-kart feeling. The MINI One Convertible has a good standard equipment list including air-conditioning and is equipped with all the sophisticated active safety features of the Cooper and S including EPS electromechanical steering, DSC stability control, four airbags and the rear rollover bar behind the rear seats that pops up automatically in the event of a rollover incident.

In addition to the new One Convertible, Cooper and Cooper S models will get minor performance and economy improvements for 2010.

One response to New Mini One Convertible