There’s no doubt that the Germans love convertible cars and despite it coming around at the wrong end of the summer, the Frankfurt Motor Show promises a treasure trove of stunning new cabriolets and roadsters when it opens on 15th September 2009. 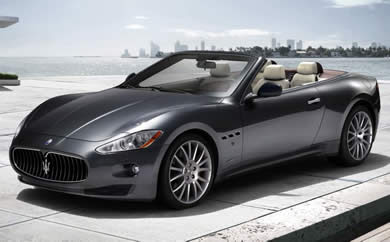 The Maserati GranTourismo finally looses its top to return a convertible to the Italian brand’s range. Pininfarina styling at its best. The roof is canvas and the power comes from the same 4.7 litre V8 as the GranTourismo S coupe.

Two new convertible Mercedes cars have been seen nearing the end of testing and this may well be the perfect opportunity for their first official public viewing.

The E-Class coupe will loose its top as an all new model to compete directly with the new Audi A5 Cabriolet. Source suggest unlike the Mercedes SL and SLK Roadsters that it will come with fabric roof to maximise interior and luggage space while keeping the weight down. Visually it will be much as the coupe with a slightly modified rearend. We would expect it to come with all 5 different engine choices from economical diesel units up to a 5 litre V8. One feature of note seen during testing was a unique wind deflector at the top of the windscreen. This may be used to reduce internal wind buffeting at high speeds. 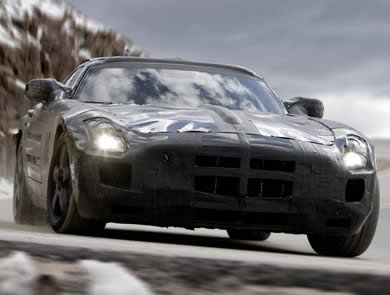 It is also likely that we will have the first view of the roadster version of the SLS AMG supercar that has been seen undergoing tests. It will accompany a gullwing coupe that was developed alongside by AMG. Both will be powered by a 571 horsepower 6.3 litre V8 engine under a very long bonnet. The engine is mounted so far behind the front wheels that an ideal front/rear weight distribution of 48 to 52 percent is achieved. The SLC Roadster replaces the stunning McLaren Mercedes SLR which lacked the excitement of some of its competitors. Styling is expected to be inspired by the classic 300SL.

Mazda are celebrating the 20th birthday of the fun MX5/Miata roadster with Superlight Speedster concept. The stripped down speedster is sadly unlikely to make production which is a shame as we imagine it would be a hoot to drive

Audi are due to release the Audi R8 Spyder which has been circling the Nurburgring race track since last summer. The roof appears to be a fabric full roof rather than a targa panel. 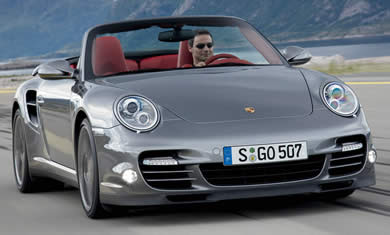 Porsche are beefing up their 911 Turbo after an embarrassing run in with the Nissan GT-R at the Nurburgring. The 3.6 litre engine makes way for the 3.8 litre unit from the Carrera S and this is boosted by two variable-vane turbos to give 500 hp. The direct injection engine also improves economy. The computers controlling traction and stability will also be improved for better driver appeal. Finally the 911 Turbo gets a facelift both inside and out. However it still looks much like every 911 that came before it.

A roadster version of the super-exclusive, limited edition Reventón is said to be unveiled to the public at Frankfurt. The original Reventón was limited to 20 units at $1,000,000 each. The Lamborghini Roadster is said to be produced in just half the quantity and with a $1.6 million price tag and a monstrous 670 horsepower from the 6.5 litre V12 from the LP670-4 SV. 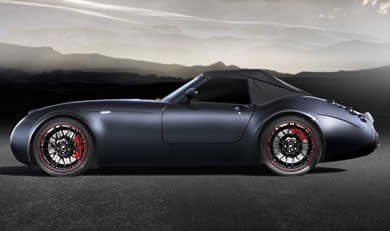 German sportscar maker Wiesmann plan to unveil a limited edition MF5 Roadster. Powered by the BMW V10 from the M5 and M6 in a lightweight chassis, the MF5 promises some thrills. Only 55 examples will be built, and sold at a list price of €189,500 (circa $313k USD).

The Mini Speedster will be a sportier alternative to the existing four-seat convertible.